Breaking News
How you communicate determines the type of seller you are · The Sales Blog
Steve Blank in seven steps for small business recovery
IDBI Bank back in black after 13 quarters, reports Rs 135 crore profit in Q4
What does a well-founded risk decision look like?
03 Jun, 2020
Skip to content

On Thursday, November 16, 2017, around sunrise, there was a strong oil smell and potential oil leakage along the TransCanada pipeline through Marshall County, South Dakota. The leak had been identified by a farmer 10 miles west and north of Langford (where I live) and about 10 miles from Britton. On Thursday, mid-morning, TransCanada employees planned a long-term stay in Marshall County.

Early Friday morning, I received a message on the Facebook page of The Front Porch (our local bar / restaurant) from someone I did not know, which happens often. The person said he wanted a catered meal for 50 people that night in an outdoor location. I called the restaurant manager with the information so that she could be prepared. It turns out that this man was TransCanada's Director of Logistics. By the time he came into direct contact with the Front Porch manager, he did not need an evening meal for 50 people. He had gone up to 7 meals served on site for 120 workers from the oil spill, from Friday to Sunday, when their contracted mothership would arrive.

When we arrived in the cornfield the first night with 7 hot roasters to set up on a table in the cold winter air, I asked the logistics manager, "How did you find the porch? "He said he had been looking for us on Google. . That's also why he had access to portable toilets, hotel rooms, dumpsters, trucks and other essentials for setting up a shop. It was good for us and the other companies he accessed via Google, but bad for several companies in nearby cities who could also have provided some of these essential items. However, these other nearby businesses had never claimed their location on Google Maps, nor did they have any presence on social media or on a website.

Because of this initial connection via Google, The Front Porch served a hot lunch on site, Monday through Saturday, to 80 workers from December to March. It's a financial bargain for a small town restaurant, especially in the winter. Thanks Google!

Every month, as the social media officer for The Front Porch, I get a report from Google. On November 17, 2017, our activity exploded! (see photo below) The red tip shows searches on Google Maps. 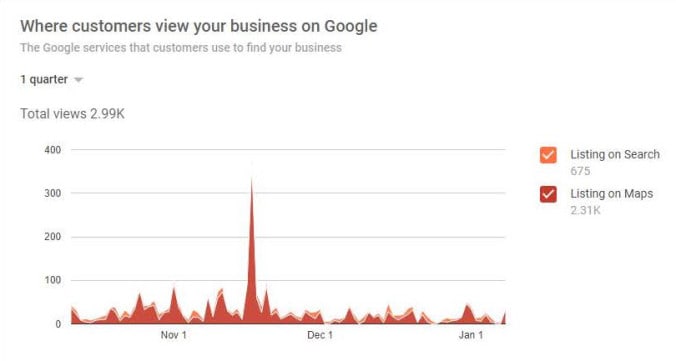 Paula is a co-founder, investor, and trustee of The Front Porch's board of directors, a locally owned bar and restaurant that also houses offices for three additional companies in Langford SD. #Irrural

Paula Jensen's passion for personal and professional life is her passion for community development and leadership. Paula resides in her home town of Langford, South Dakota, whose population is over 318 years old. She is a grant writer and community coach for Dakota Resources, based in Renner, South Dakota. Dakota Resources is a 501c3 community development financial institution that aims to stimulate financial and human investment in rural communities that invest in their communities. Contact her at [email protected]

Do you remember when we were trying to hide our accents?